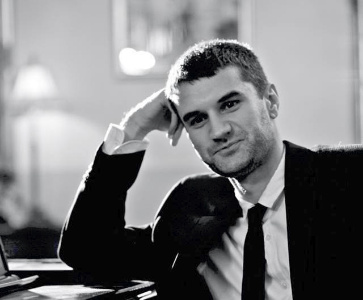 NY based Jazz Pianist, Alex Minasian returns to the Regattbar with his trio for a very special one night only performence.

With two degrees from NYU, Alex Minasian has, at a remarkably young age, established himself as a versatile pianist, educator, and impresario in many different musical genres. As a pianist, Alex has has studied with some of the greatest pianists in jazz history, including Hank Jones, Don Friedman, Jean-Michel Pilc, and James Williams, and has performed in most of the country's most famous jazz rooms, such as Birdland, the Blue Note, Cafe Carlyle, Yoshi's, Bohemian Caverns, Herb Alpert's Vibrato, Iridium, Jazz @ Lincoln Center, and the Apollo Theater.

Alex has also headlined such important jazz celebrations as the Rochester Jazz Festival appearing as co-leader of a trio with Canadian bassist Brandi Disterheft. In 2013, Minasian, Disterheft, a veteran drummer Steve Williams (Shirley Horn), formed the Hanky Panky Trio to honor Hank Jones..The Hanky Panky trio is featured in Season 2 of the hit Netflix show, 'Orange Is The New Black'. They have performed at the Montreal Jazz Festival with Sheila Jordan, and as a trio at the Istanbul Jazz Festival. Minasian's trio has a weekly residency at the Iconic New York Restaurant Tavern on the Green. Alex has been featured in Yerevan Magazine, a Los Angeles-based Armenian publication promoting Armenian news and culture.