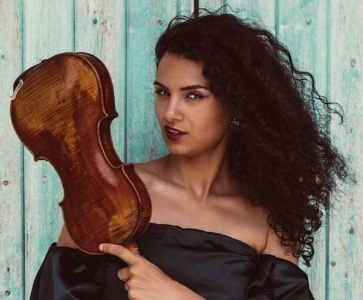 Composers inspired by their roots, plus two superb soloists

Sinfonia Toronto’s February 22 concert in the Meridian Arts Centre is appropriately titled ‘Musical Bridges’. Celebrating the iconic Armenian composer Komitas’ 150th anniversary, Maestro Nurhan Arman has designed a program that features Nuné Melik, a virtuoso Armenian violinist, and the brilliant Canadian mezzo-soprano Beste Kalender. The musical selections for the evening are a bouquet of songs and dances juxtaposing the works of Komitas with miniature folkloric gems by several great composers, all inspired by their national roots.

The concert will feature two important premieres. Violinist Nuné Melik will perform the Canadian premiere of Armenian composer Vache Sharafyan’s Concertoserenata, and mezzo-soprano Beste Kalender will give the world premiere of Turkish composer Tahsin Incirci’s Three Songs. The program will also include dances with Greek and Hungarian roots.

Born in Siberia, Nuné Melik began playing violin at six. Her first solo performance with orchestra took place only a year later with the Kazan Symphony. Since then she has appeared as a soloist and chamber musician throughout Armenia, Canada, Denmark, France, Germany, Italy, Mexico, Russia and the US. Since 2015 she has held the post of Artist-in-Residence with the Miami Chamber Orchestra and Mexico’s Orquestra Filarmonía de Xalapa. Nuné has performed in New York in both Stern Auditorium and Weill Recital Hall at Carnegie Hall, Lincoln Center’s Merkin Hall and at UN Headquarters, and in major halls in other international centres, including the Bolshoi and the International House of Music in Moscow.

Mezzo-soprano Beste Kalender grew up in Turkey. Opera became her dream at a very early age. She recalls an afternoon when she was either five or six years old when her parents were watching television and she saw “this lady in a huge, puffy red dress making this magnificent sound. I didn’t know it was opera, of course, but I pointed at her and said, ‘I want to be her.’” Beste has performed operatic roles and recitals in Belarus, France, Italy, Norway, Russia and Turkey and across Canada. She has starred in a number of opera productions in Toronto, appearing in many roles at the RCM, with VOICEBOX Opera, and singing the title role of La Belle Hélène with Toronto Operetta Theatre and Dorabella in Mozart’s Cosi Fan Tutte with the Vancouver Opera Company.

Now in its 21st season, Sinfonia Toronto has toured in the US, South America and twice in Europe, receiving glowing reviews. It has released four CD’s, including a JUNO Award winner, and performs in many Ontario cities. Its extensive repertoire includes all the major string orchestra works of the 18th through 21st centuries, and it has premiered many new works. Under the baton of Nurhan Arman the orchestra’s performances present outstanding international guest artists and prominent Canadian musicians.

Tickets are $42 adult; $35 senior and $15 student. They can be purchased online at http://www.sinfoniatoronto.com/