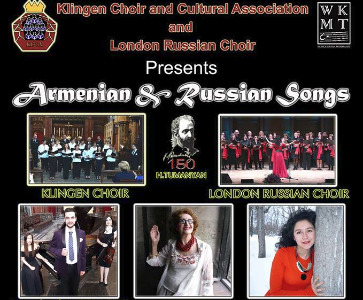 London based Armenian Klingen Choir and Cultural Association (KCCA) and London Russian Choir (LRC) are collaborating for the first time to present a spectacular programme of Armenian and Russian songs performed by both choirs at the magnificent St Cuthbert's Church in Kensington.

Tenor, Conductor Sipan Olaha from KCCA and Soprano, Conductor Polina Shepherd from LRC are going to conduct their choirs and perform unique solo pieces themselves. There will additionally be solo performances by soprano Hayarpi Yeghikyan and pianist Marina Blokhina Ersoz

Well known poetry recitalist and actress Jenia Nersisyan will present a poem by the great Armenian writer Hovhannes Tumanyan. It is the 150th birth anniversary of the magnificent writer and most of the Armenian songs of this event are based on his lyrics to highlight his legendary literary heritage.

Acclaimed artist Leonie Piladjian will present a picture series of 6 paintings on canvas in Armenian themes.

Event is sported by Markson Pianos