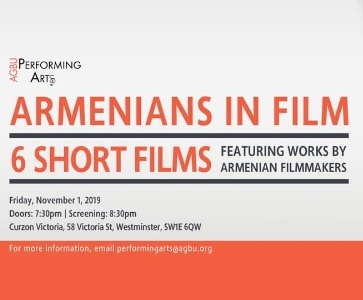 Doors open at 7.30pm - for a meet & greet at the Curzon Bar where we will meet some of the movie producers, socialise over drinks and get ready for the amazing movies!

The AGBU Performing Arts Department’s (PAD) Armenians in Film: 6 Short Films by Armenian Filmmakers, has been showcasing works by award winning Armenian filmmakers at the Film Society of Lincoln Center, the most distinguished film venue in the US, since 2015.

Now in its fifth year, PAD is collaborating with AGBU YP London in bringing the series to the UK.

These talented artists are graduates of prestigious film schools, such as NYU Tisch School of the Arts, Columbia University and UCLA, and have screened their films at legendary festivals such as the Cannes Film Festival, Toronto International Film Festival, Sundance Film Festival, Sunset Film Festival, and more. The screening is followed by a Q&A session with the filmmakers, moderated by a renowned film industry professional.