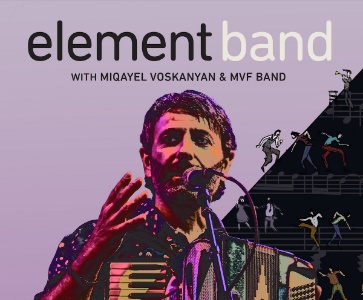 Element Band’s distinctive arrangements both preserve and refresh traditional Armenian songs by infusing each song with large-bodied vocals and contemporary sounds. The band’s original compositions resonate, bringing the old world to life through a modern lens. Armenian folk musician Miqayel Voskanyan and his band will open the evening with what Miqayel calls their “mostly folk with jazz-fusion combinations.” Pairing the tar, an ancient Armenian instrument, with instruments such as the saxophone, drums, and keyboard, their musical style incorporates jazz, Armenian folk, rock, and funk, making them a staple on the jazz festival circuit.