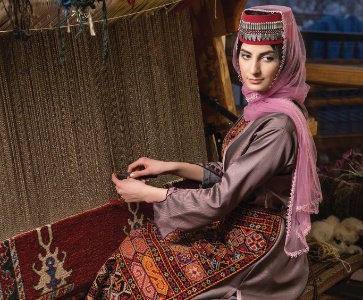 A concert celebrating the 150th Anniversary of Komitas.

One of Armenia's leading folk singers, Hasmik Harutyunyan is world-renowned for her work with Yerevan's Shoghaken Ensemble and for her mellifluous renditions of Armenian lullabies, one of the most evocative genres in Armenian music. Her passionate interpretations of melodies from villages across the Armenian plateau offer a mesmerizing glimpse into lost world. In addition to songs sung by her ancestors from the historical Armenian province of Moush, Hasmik earned many of the songs in her repertoire from elder women who emigrated from Western to Eastern Armenia before or during the Armenian Genocide, as well as from their descendants and old song collections.

Joining Hasmik Harutyunyan will be Kitka, Oakland's trailblazing women's vocal arts ensemble. Inspired by traditional songs and vocal techniques from Eastern Europe and Eurasia, Kitka has earned international recognition for its distinctive sound, exploring a vast palette of ancient yet contemporary-sounding vocal effects. Kitka's commitment to presenting folk song as a living and evolving expressive art form has led to collaborations with some of the world's most exciting indigenous musicians and contemporary performance makers. Now celebrating its 40th season, Kitka began as a grassroots group of singers from diverse backgrounds who shared a passion for the lush harmonies, stunning dissonances, asymmetric rhythms, intricate ornamentation, and resonant strength of traditional Eastern European women's vocal music. The group has since evolved into an award-winning ensemble known for its artistry, versatility, and mastery of regional vocal styling, as well as for its innovative explorations in new music for women's voices.