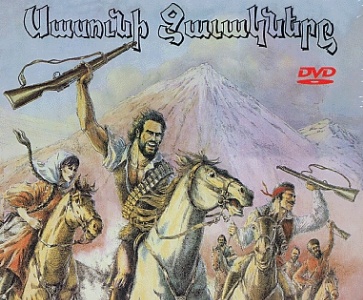 A film by SARKY MOURADIAN

SONS OF SASSOUN (102 min.) presents the story of a group of Armenian freedom fighters trying to defend themselves and their village from the invading Sultan in his attempt to colonize Caucasia around 1908. The film is filled with action, drama, love, comedy, music, costumes, and dancing.

SARKY MOURADIAN is a filmmaker, television host, and music composer. He was born in Beirut in 1931. Performing music since age 16, he moved to Boston, Massachusetts in 1955 to continue his education in music. However, his main passion had always been in film. In 1960, he moved to Los Angeles where he attended "Theater of Arts" and began working in the film industry as an actor and director. His films include, Baghdasar Akhbar (1973), Tears of Happiness (1975), Promise of Love (1978), and The Forty Days of Musa Dagh (1982). Mouradian established one of the first Armenian television shows in Los Angeles in 1978 titled, Armenian Teletime, where he hosted various Armenian celebrity performers and politicians. In 2016, he was awarded a gold medal by the Ministry of Culture of the Republic of Armenia.

THE ARMENIAN FILM SOCIETY is a monthly event that meets on the first Friday of each month at Abril Bookstore. Lead by Armen and Mary Karaoghlanian, the evenings are composed predominantly of film screenings and discussions, with occasional lectures, workshops, classes, and other types of activities relating to film with an element of Armenian culture and/or involvement. The purpose of the film society is to bring together people of all backgrounds and expose them to the rich cinema of Armenia, as well as talented filmmakers with an Armenian background.