The Gurdjieff Ensemble at Symphony Space 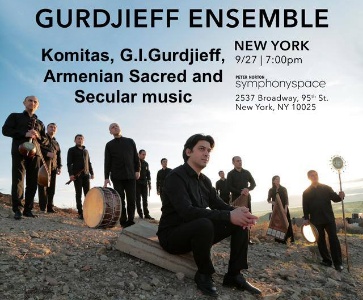 In Program : Music by Komitas and G.I.Gurdjieff

The AGBU Performing Arts Department (PAD) is proud to be presenting ECM Records artist The Gurdjieff Ensemble’s North American debut. Winner of the Edison Awards for Album of the Year in 2012, The Gurdjieff Ensemble founded by Levon Eskenian is an eleven-piece ensemble that performs ethnographically authentic arrangements of music by Gurdjieff and Komitas on Armenian traditional instruments, selling out venues such as the Elbphilharmonie Hamburg in Germany, the Sala São Paulo in Brazil, the Bozar Centre for Fine Arts in Belgium, and the Albert Hall in Australia.

With performances in the east and west coast, as well as in the mid-west, the award winning ensemble will be celebrating the 150th anniversary of Komitas, Armenian priest, musicologist, composer, and founder of the Armenian national school of music. Featured throughout the performances will be pianist and fellow ECM recording artist Lusine Grigoryan, performing pieces from her ECM Records debut album ‘Komitas: Seven Songs’, in which Gramophone describes “… Grigoryan’s performances are light, transparent and vibrate with colour.”