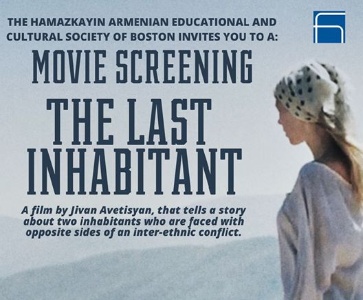 The Hamazkayin Armenian Educational and Cultural Society of Boston invites you to a:

Movie Screening - The Last Inhabitant - A film by Jivan Avetisyan, that tells a story about two inhabitants who are faced with opposite sides of an inter-ethnic conflict.

Directed by Jivan Avetisyan with English subtitles | Music by‎: ‎Serj Tankian | Produced by five countries: Armenia, Lithuania, Sweden, Lebanon, and the US. | Portion of the proceeds to benefit future films made by the director.