The Lifesavers - American Humanitarianism and YMCA Philanthropy in Armenia 1918-1920 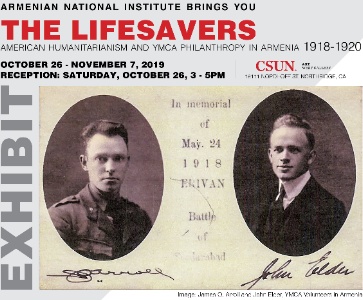 This exhibit explains the role of the YMCA and American relief work during the first republic of Armenia (1918-1920) and focuses on John Elder and James O. Arroll who arrived in Yerevan in January 1918 to open a YMCA center. Neither Elder nor Arroll had anticipated being stranded as the only Americans left in the country’s capital city with all communication to the outside world cut off when the front line faltered. World War I was still raging at the time and Allied forces were in retreat on the Caucasian front. The November 11, 1918 Armistice that ended World War I was many months away. By the time they left Yerevan in August 1919, Elder and Arroll had become responsible for the entire operation set up by U.S.-based charities, which earned them tribute from U.S. President Herbert Hoover.

For more information on the Armenian Genocide, please visit: