Violin-cello duo: a tribute to Komitas 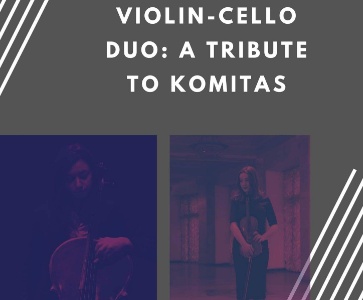 Violin-cello duo: a tribute to Komitas

A tribute cello and violin duo concert dedicated to the Armenian composer Komitas on his 150th anniversary. The composer's life will be presented during the concert, and fourteen of his Armenian folk major compositions will be played.

Nayiry Ghazarian is a Cello player who started her music studies and career in Lebanon. She received her masters degree in performing arts and teaching from Yervevan State Conservatory after Komitas with professor Armen Mesropian and Aram Talalyan. She is an active member in chamber music and youth string ensemble.

Lilit Antonyan is a violin player who received her music degree from Yervevan State Conservatory after Komitas in Armenia, with professor Armen Harutyunyan. She continued her education at Lübeck Academy of Music with Professor Maria Egelhof-Germany. She participated in various international festivals, and won many international competitions .