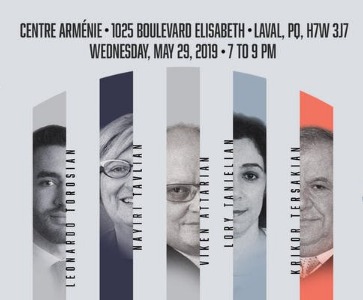 There is a growing sense that the Armenian Diaspora is losing its vitality. Anxieties about its sustainability are palpable. In Canada, Parliament's recognition of the genocide, the growing pull toward further integration into broader society and the recent political transformations in the Republic of Armenia compel us to revisit the traditional priorities of Armenian communities. The primacy of genocide recognition, identity preservation and assistance to Armenia and Karabakh are put into question in a context where Armenian communities seem to be on a path of gradual erosion. Where do we go from here?

The Armenian Canadian Council will host a public conversation on the state and development of Montreal’s Armenian community. Premised on a deliberative and solution-oriented approach, it proposes an event where a dynamic panel will interact with the audience on the meaning of community and a new agenda for its revitalization.