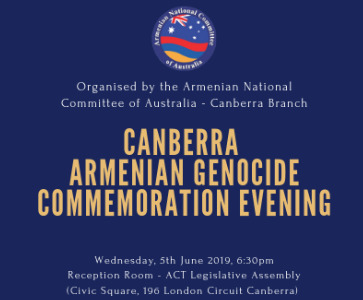 The Armenian National Committee of Australia - Canberra Branch has organised the first Armenian Genocide Commemoration event to be held in the Australian Capital Territory. It will take place on Wednesday 5th of June, 2019.

Dr. Panayiotis Diamadis, who is Vice President of the Australian Institute for Holocaust and Genocide Studies, will be the keynote speaker at the event marking the 104th anniversary of the genocide committed by the Ottoman Empire against its Christian Armenian, Greek and Assyrian minorities during World War I.

The Canberra Armenian Genocide Commemoration Evening will take place at the Reception Room in the ACT Legislative Assembly (Civic Square, 196 London Circuit Canberra), with the official program starting at 6:30pm.

Those who wish to attend will need to RSVP by the 30th of May by emailing admin@anc.org.au.