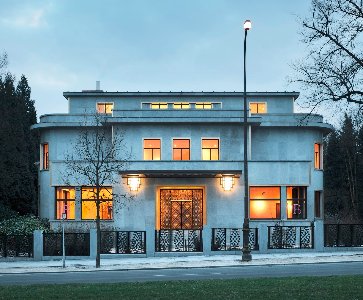 The Boghossian Foundation is delighted to welcome the Armenian General Benevolent Union (AGBU) for a musical weekend combining classical music and jazz. Following the official opening on Friday 1st June at the Brussels Town Hall with the AGBU String Ensemble, the public is invited to two exceptional concerts at the Villa Empain. The Musical Weekend is conceived on the occasion of the centenary of the first Republic of Armenia and for the benefit of AGBU Children’s Centers in Yerevan.

Saturday evening, the music of Shostakovich, Rachmaninov and Babadjanian will echo in the Salonsof the Villa Empain, with a performance by Varduhi Yeritsyan, a French-Armenian pianist with a vast and diversified repertoire and by the brothers Hrachya and Sevak Avanesyan. Sunday will be dedicated to the jazz trio of Yessaï Karapetyan, a French-Armenian pianist currently performing on the most prestigious jazz stages.

Founded in Cairo in 1906 by philanthropist Boghos Nubar, AGBU is the largest non-profit Armenian organization in the world. It runs numerous programmes in the fields of academic research, leadership training, the preservation and the promotion of heritage, education and culture as well as humanitarian assistance and development projects.

Varduhi Yeritzyan was born on Labour Day in Armenia and has lived in France since she was 20. She occupies a singular place on the contemporary piano scene. Thanks to her double culture inherited from such great masters as Brigitte Engerer, Vladimir Krainev, Msitslav Rostropovitch, Denis Pascal and Claire Désert, she is both a specialist of the Russian repertoire and a regular performer of French music. After having won numerous international awards, she was invited to the most renowned stages and festivals (Roque d’Anthéron, Piano aux Jacobins, Concertgebouw d’Amsterdam, Auditorium du Louvre, Salle Pleyel…). During the 2015-2016 season, she published recordings of Alexander Scriabine’s sonatas as well as a record dedicated to Armenian music recorded at the Théâtre Impérial de Compiègne for the label Paraty | Distribution Harmonia Mundi. She is also assistant professor of the piano class of Denis Pascal at the Paris Conservatoire National Supérieur de Musique et de Danse.

Hrachya Avanesyan, violin, is considered one of the most inspired artists of his generation.In April 2006, while still a teenager, he won the first prize at the Yehudi Menuhin competition. In 2008, his talent was recognized once again in the world of music when he won the prestigious Carl Nielsen prize in Denmark. Born in Armenia in 1986, at 16 Hratchya Avanesyan moved with his family to Belgium, where he now lives. He studied with Igor Oistrakh at the Brussels Royal Conservatory as well as with Augustin Dumay at the Chapelle Musicale Reine Elisabeth. He is a member of the Avanesyan Trio, founded in 2010, which brings together the brothers Hrachya and Sevak Avanesyan and Julien Libeer. Each of these three musicians has performed on renowned stages, such as Wigmore Hall in London, Casa Musica in Lisbon or the Théâtre de la Ville de Paris. The trio is wont (?) to explore some of the more original pieces of Russian and Western musical traditions, and has a particular affinity for Armenian chamber music.

Born in 1989 in Armenia, Sevak Avanesyan first studied with M. Abrahamyan (a student of Rostropovitch) in Yerevan, then with V. Spanoghe at the Royal Conservatory in Brussels. He then joined the class of Claudio Bohorquez at the Hans Eisler Hochschule in Berlin. Sevak earned numerous international awards that gave him access to prestigious international stages. He is a member of the Avanesyan Trio, along with his brother Hrachya and the pianist Libeer. The Trio has perfected its art with the Artemis Quatuor at the Chapelle musicale Reine Elisabeth. Sevak Avanesyan plays on a cello known as “the King”, by Mateo Gofriller, graciously lent to him by Mischa Maisky.