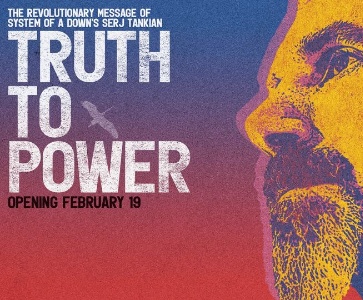 The Armenian Film Festival Australia presents TRUTH TO POWER, the fascinating documentary chronicling System of a Down frontman, Serj Tankian's history of activism, using music as a vehicle for his messages of change.

Streaming from 19 February 2021, the film can be rented from our link ($12 USD) and streamed anywhere in the world.

With exclusive interviews, adventures, and original footage personally filmed by Serj, TRUTH TO POWER allows audiences backstage access to an international rock star whose faith in music not only revolutionised heavy metal, but also world events. Throughout his life, the musician has pursued social justice, harnessing the power of his songs and celebrity for real political change. Serj’s voice is equally likely to take on American corporate greed as lambast the corrupt regime of his homeland. His decades-long campaign for formal U.S. recognition of the Armenian Genocide was finally approved by Congress last year.

TRUTH TO POWER is also an artist portrait with a revealing look at the musician as he writes music—from inception to recording—and pursues ambitions outside of the band.

This is a global digital release.

Rent the film from the Armenian Film Festival Australia unique link and stream from anywhere in the world. Note: The price you will pay on the streaming platform is $12 USD.