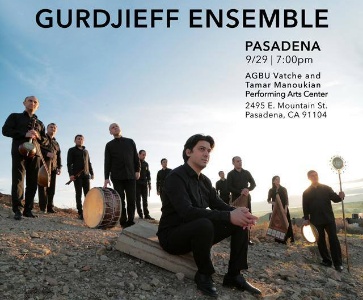 In Program : Music by Komitas and G.I.Gurdjieff

The Gurdjieff Ensemble US debut tour with AGBU Performing Arts is dedicated to the 150th anniversary of Komitas (1869-1935). The internationally acclaimed Gurdjieff Ensemble was founded by Levon Eskenian to play ethnographically authentic arrangements of the G.I. Gurdjieff/Thomas de Hartmann piano music. The Ensemble consists of Armenia’s leading musicians playing traditional instruments. Their debut album on the famous ECM records, “Music of Georges.I. Gurdjieff”, was widely acclaimed, and won prestigious awards including the Edison Award in the Netherlands. The Ensemble has been touring the world with sold out concerts at major festivals and concert halls in Europe, Australia, the Middle East and South America. The Ensemble has performed in such prestigious festivals and venues as the Elbphilharmonie in Hamburg, the Boulez hall in Berlin, the Bozar Center in Brussels, the Holland Festival, the Morgenland Festival in Germany, the Albert Hall in Canberra, the Imago Dei Festival in Austria, the Gulbenkian Hall in Lisbon and many others.

With performances in the east and west coast, as well as in the mid-west, the award winning ensemble will be celebrating the 150th anniversary of Komitas, Armenian priest, musicologist, composer, and founder of the Armenian national school of music. Featured throughout the performances will be pianist and fellow ECM recording artist Lusine Grigoryan, performing pieces from her ECM Records debut album ‘Komitas: Seven Songs’, in which Gramophone describes “…Grigoryan’s performances are light, transparent and vibrate with colour.”