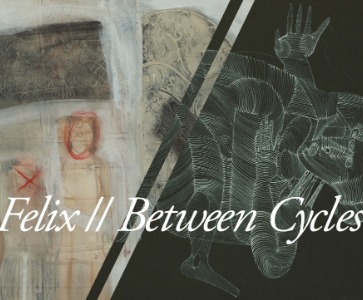 The exhibition will open June the 2nd 2019 at 18:00 PM at Saryan Musuem. Until June 23rd, the exhibition displays the renown artist’s latest works prior to his death in 2014, bringing back to life the final works of the artist who often breached the boundaries of the usual mode of style.

Felix Eghiazarian’s mixed media works reflect his mastery and authenticity in craft. His abstract and figurative works explore themes of reunion, loss, sexuality and the space between life and death.

Born in Yerevan in 1947, Felix graduated from the Institute of Fine Arts and Drama. Since 1970 he has been a constant participant of republican, all-union and international group exhibitions and biennials - Armenia, Russia, Georgia, France, USA, Czechoslovakia, Portugal, Italy, China and elsewhere. He was the chief stage designer of the Chamber Theatre in Yerevan (1983-1988). He had over 20 solo exhibitions in different countries and since 1997, he was a member of the French Association of Artists "Figuration Critique". A Member of the Artists’ Union of Armenia, he was awarded the Meritorious Artist of Armenia in 2012.

The curator of the Exhibition is Aramazt Kalayjian who worked closely with Felix Eghazarian’s family to achieve this unique display of the painters’work. The exhibition follow two series of works that have their own cycles of themes - Cycle Zero is a series comprised of Eghiazarian’s final unseen works, while Cycle One is a series from his mixed media works where Eghiazarian’s passion for experimentation and mastery in craft culminate in eloquent apparitions hybridizing still life drawings, typography, relief print and figurative drawings.

The opening event will feature a musical performance by Alex Baboian and Armen Hyusnunts who will perform together on stage in the exhibition hall. Alec Baboian’s music is deeply rooted in jazz, but also blossoms with many other musical influences - blues, soul, electronic, avant-garde, 20th century classical music, and various folkloric music. Armen Hyusnunts is a saxophonist, flutist, composer, arranger, bandleader of the Armenian State Jazz Band, Honoured Artist of Republic of Armenia.