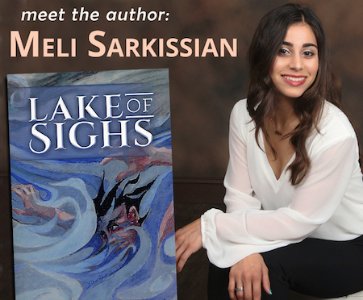 LAKE OF SIGHS is a novel inspired by the Armenian legend of Akhtamar. This tragedy hangs over the head of the current princess Tamar. Named after the young woman from the legend, Princess Tamar lives on the same island as her namesake. She has no wish for her own life to repeat the tale of doomed love. Aleena, her sister, tells her she must forge her own path—even if it means taking a risk. Princess Tamar isn’t so sure. The thought of falling in love only to lose her beloved is too much to bear, so she throws herself into art: fairy tales, music, and dance. Her passions take her to a folk dance group, where she meets a man who shares her zest for life. But can their growing love protect him from the fate foretold by legend?

MELI SARKISSIAN holds a bachelor's degree in European studies and psychology and is currently earning a master's degree in forensic psychology. Born in Cyprus, Sarkissian was raised into an Armenian family whose proud traditions, particularly the folk-dance group that Sarkissian was a part of, sparked the inspiration for this novel.