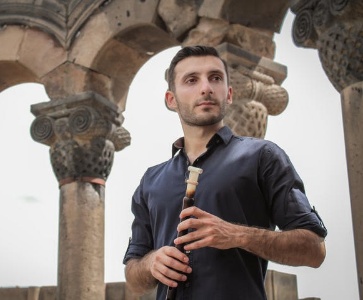 Direct from Yerevan, Armenia, Duduk master Harutyun Chkolyan makes his New York City solo artist debut in an evening of Armenian folk and contemporary works. With piano and percussion accompaniment, Chkolyan will perform on not only the duduk, but other Armenian and Near Eastern wind instruments such as the zurna, pku, shvi, ney flute, and clarinet.

Harutyun Chkolyan is a multi-instrumentalist specializing in Armenian folk wind instruments such as the duduk, zurna, shvi, pku, in addition to the clarinet and ney flute. He is a graduate of the Komitas State Conservatory of Yerevan, where he studied under renowned duduk master Gevorg Dabaghyan. Considered a musical prodigy, he initially began his studies on the shvi (an Armenian recorder) at the age of six.

Despite his relatively young age (born in 1991), Chkolyan is a seasoned professional who has performed extensively throughout the world. In 2006, he had the honor of performing for Senator Edward Kennedy at the Massachusetts State House. In April 2007, Chkolyan was a featured guest of Marco Werman on PRI's The World in partnership with BBC and WGBH. He is currently a member of the State Folk Ensemble of Armenia and has performed with the Armenian Philharmonic Orchestra, iCulture Orchestra, as well as other smaller ensembles. He has frequently collaborated with Maestro Kirill Karabits (Bournemouth Symphony Orchestra, Deutsches Nationaltheater and Staatskapelle Weimar). Chkolyan has also appeared in a music video with Grammy Award winner Joss Stone and was chosen as the duduk soloist for Serj Tankian's (System of a Down) composition "Orca Symphony no.1". He has contributed to hundreds of studio tracks for other musicians during his career.