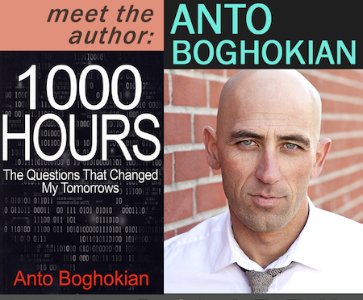 The Questions That Changed My Tomorrows

1000 HOURS is a raw and candid account of one thousand hours of Anto Boghokian's life, where he shares his struggles and insights, failures and successes. Have you ever felt like time is just slipping through your fingers? Are you struggling to move your life in a positive direction but can’t find traction? Anto's experiment was born out of a desire for change, the hope that positive traction can be found in an honest and unrelenting examination of how your time is spent. Anto allows us to see an inward transformation that gradually builds into an awakening where life begins to move forward and upward. This book will help you find the grit to get into gear and go, never losing traction with down-to-earth reality. Get real, get woke, get moving forward.

ANTO BOGHOKIAN is an Armenian American actor, spoken word artist, and producer. He was born in Kuwait and has spent summers in the countryside of Lebanon, until the events of the Gulf War suddenly made Glendale, California his new home. Two decades later, Anto found himself in an acting studio, where the teacher had him share poems weekly. That is where Anto realized his passion for storytelling. 1000 HOURS is Anto's first book. Several projects are currently in development, including a spoken-word album.