The Gurdjieff Ensemble and HaitianDansCo 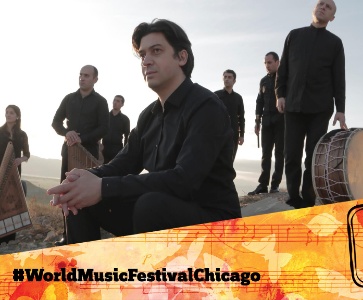 The full schedule can be found at worldmusicfestivalchicago.org.

The world will come together for the 21st Annual World Music Festival Chicago at 17 venues across the city from September 13 to 29. Celebrating diverse music from across the globe, this FREE festival is produced by the Chicago Department of Cultural Affairs and Special Events (DCASE) and is the largest festival of its kind in the United States.

In 2008 Lebanese-born Armenian pianist and composer Levon Eskenian launched The Gurdjieff Ensemble to create "ethnographically authentic" arrangements of his country's folk music. Eskenian filled its ten-piece lineup with virtuosos on traditional Armenian and Middle Eastern folk instruments, including the duduk (a double reed made from apricot wood, with a full, slightly nasal tone), the kamancheh (a bowed stringed instrument of Iranian origin, also called the spike fiddle, whose sharp, grainy sound can cut through dense arrangements), and the santur (a hammered dulcimer widespread in the Middle East and western Asia, which can pack dozens of pinprick notes into a couple seconds). Eskenian took the ensemble's name from 20th-century Armenian author, mystic, and composer G.I. Gurdjieff, who spent two decades traveling through the Middle East, central Asia, and northern Africa studying folk music. Gurdjieff owes much of his legacy to his collaboration with Russian composer Thomas de Hartmann from 1924 to 1927: he dictated roughly 300 compositions based on that folk music to de Hartmann, who transcribed them in Western notation. Eskenian and company wanted to reintroduce the sounds that inspired Gurdjieff via a modern interpretation of his work, which resulted in the 2011 album Music of Georges I. Gurdjieff (ECM). For their next project, the Gurdjieff Ensemble honored another giant of Armenian folk music: priest, scholar, ethnomusicologist, and composer Soghomon Soghomonian, better known as Komitas. He first studied music in the 1880s at the Etchmiadzin Cathedral, the heart of the Armenian Apostolic Church, and became an expert in khaz, the notation system used in Armenian religious music. He also translated thousands of folk songs into Western notation, though his work all but ended with the profound trauma he suffered during the Armenian genocide in 1915. The state-owned college of music in the Armenian capital, Yerevan, is named after him—the Komitas State Conservatory is where Eskenian earned his master's degree in piano. The Gurdjieff Ensemble's smoldering, somber 2015 album, Komitas (ECM), brings detail, patience, and nuance to already powerful traditional sounds, amplifying their emotional resonance.

Haiti is by far the most populous country in the Caribbean with a dominant French cultural influence, but that's not the only thing that makes it unusual in the region: its deeply rooted African religious influence is more Dahomey than Yoruba, which in large part accounts for the differences between Vodou and closely related faiths such as Santería and Candomblé. Cultural and religious traditions shaped by the African diaspora, whether in New Orleans, Puerto Rico, Brazil, or elsewhere, all give music and dance a central place in the worship of the sacred, and none of the dances is purely secular. The founder of this group, Dieufel Lamisere, a native of Port-au-Prince, has studied dance in many forms, among them jazz, modern, and ballet. His current ensemble, HaitianDansCo, combines those influences with folkloric and traditional dance, and has presented Haitian culture all over the Americas. The company is part of a larger organization called Dance to Save Lives, which teaches Haitian youth, raises money for infrastructure and education, and offers food, shelter, and career opportunities to young dancers in need.