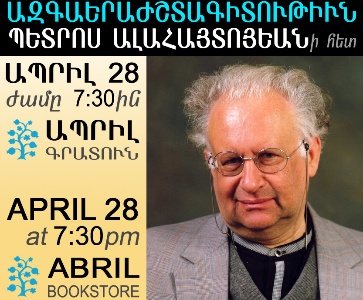 Program will be held mostly in Armenian.

Ethnomusicologist Bedros Alahaidoyan has spent a lifetime collecting songs from numerous regions of Historic Armenia. He will narrate his journey from when he first carried a cassette recorder and met the first survivor, to the publication of his two books, dedicated to Palu and Van. Vocalist Areni Agbabian will sing select songs from these books, and Dr. Dzovig Markarian will present a musical page dedicated to Alahaidoyan’s collection, on Houshamadyan.com.

BEDROS ALAHAIDOYAN was born in 1934 in Lebanon. His interest in Armenian music developed while a member of the famous “Kousan” Choral Group, directed by Parsegh Ganatchian. He attended the Universite’ Libre de Bruxelles, Belgium, and graduated with a Master’s degree in Musicology. From 1985 to 1995, in order to pursue his obsession with preserving the Armenian cultural heritage, he undertook the arduous task of traveling to communities with large Armenian populations throughout Belgium, France, Greece, Syria, and the United States to interview the survivors of the Armenian Genocide of 1915 and record their experiences, their childhood recollections, and most specifically the unknown songs and orally transmitted melodies they had learned as children in their homeland of Western Armenia. His dedicated endeavor has saved from extinction innumerable folk songs and ethnic melodies. In 1994 he moved to the United States and established residence in Glendale where he writes music reviews for the Armenian language press, gives lectures on his project, while at the same time completing the classification, cataloguing and indexing of his collection. His books include, An Ethno-Musicological Collection of Palou and its Neighboring Areas published in 2009 by Drazark Press and Van-Vasbouragan Ethnological Typical Song Samples, published in 2015. Currently he is music critic and writes articles on Armenian music.

DZOVIG MARKARIAN holds a DMA in Keyboard Studies from Thornton School of Music at USC, and a MFA and a BFA in Multi-Focus Keyboard, from Herb Alpert School of Music at the California Institute of the Arts, where she serves as Vocal Coach since 2016. A contemporary classical pianist with a versatile career embracing solo and collaborative piano performance, vocal coaching and accompaniment, as well as musicological research and music editing-engraving of ethnographic and classical Armenian songs, Dzovig is a frequent guest performer at leading contemporary music scenes, such as Dilijan Chamber Music, Hear Now Music Festival, Microfest, Jacaranda, and REDCAT Contemporary Music Festivals. Since 2013, Dr. Markarian is specializing in Armenian classical and ethnographic song repertoire, by researching, coordinating archival material, editing and engraving rare editions of classical art songs and choral songs by various composers, as well as un-edited a capella ethnographic songs collected by musicologist Bedros Alahaidoyan, from Armenians displaced out of their home villages and towns throughout the twentieth century. Dr. Markarian is the music editor and engraver of Mr. Alahaidoyan’s latest book Van-Vasbouragan Ethnological Typical Song Samples, and Parsegh Ganatchian (1885-1967): Complete Works, 2nd Edition (projected late 2018). Most recently, the Alahaidoyan-Markarian team began a collaboration with the Berlin-based website Houshamadyan.org, which publishes on an ongoing basis the page dedicated to unedited recorded voice of survivors, singing in Armenian dialects, Turkish and Kurdish, songs collected Alahaidoyan, Bedros Alahaidoyan Song Collection.

ARENI AGBABIAN An experimental and improvising vocalist and pianist, Areni Agbabian has appeared in numerous new-opera, dance, folk- and sacred-music, contemporary-jazz, and multimedia performances. In 2009, she toured worldwide with the renowned Tigran Hamasyan Quintet, garnering critical acclaim. “The singing of Areni Agbabian seamlessly spanned from sirenic beauty to angelic purity,” wrote Jazz Compass. And The Guardian noted, “Agbabian's glowing vocals sustained the rootsy feel in a mercurial mix. The agile Agbabian began to dart and scat like a Balkan Flora Purim.” Agbabian’s 2014 album, Kissy (Bag), was hailed by The New York Times as “intensely focused, moving toward some kind of hidden truth in simple lyrical images and phrases.”