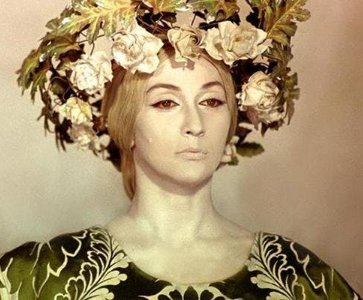 Watching Sergei Parajanov's The Colour of Pomegranates, or Sayat Nova, is like opening a door and walking into another dimension, where time has stopped and beauty has been unleashed. On a very basic level, it's a biography of the Armenian poet Sayat Nova, but before all else it's a cinematic experience, and you come away remembering images, repeated expressive movements, costumes, objects, compositions, colours."—Martin Scorsese

When presenting this film at the Toronto Film Festival in 2014, Martin Scorsese called Parajanov’s The Colour of Pomegranates “unlike anything in cinema history.” Indeed, the visual language of the Colour of Pomegranates is so personal and hermetic that interpreting it could be compared to reading a novel written in hieroglyphics. We are privileged to have author Nouritza Matossian to decode and discuss this cultural jewel of cinematography, which narrates the story 18th-century Armenian poet Sayat-Nova, in a tableau vivant in the style of medieval Armenian manuscript art, creating an aesthetic that is at once austere and achingly sensual.

This event is held in partnership with The Armenian Institute. We are immensely grateful to the Embassy of Georgia and Embassy of Armenia for their support.

Nouritza Matossian is a writer, actor, film-maker, broadcaster and human rights activist. She was born in Cyprus, educated in the UK, speaks nine languages. She writes and lectures on the arts, contemporary music, and history of Armenia.

Author of the first biography and critical study of the Greek composer Iannis Xenakis (1985), she adapted the book for a 50min BBC2 documentary, Something Rich and Strange (1991). Matossian was also the first writer to research and reveal the Armenian identity and traumatic genocide history of the American-Armenian artist in her biography, Black Angel, A Life of Arshile Gorky in 1998.

She created a one woman show, The Double Life of Arshile Gorky, playing over a hundred performances worldwide. Her book inspired director Atom Egoyan for his award-winning movie Ararat (2004) with the lead character based on Matossian.

In 2006, Hrant Dink, the Istanbul Armenian editor collaborated with Matossian on a film project After his brutal murder in January 2007 she produced, Heart of Two Nations, Hrant Dink, a 45min film of their in-depth conversations.

Matossian broadcasts on the BBC and contributes to several newspapers and magazines, including The Independent, The Guardian, The Economist, and The Observer. She was Honorary Cultural Attaché for the Armenian Embassy in London from 1991-2000. Public’s Prize at the Toronto Pomegranate Film Festival 2008, Director, Armenian Institute, London 2015-2017 and active member of English PEN, UK.

This event is part of the Asia House 2018 Autumn Arts and Learning Programme, a completely unique initiative in the UK in presenting a pan-Asian artistic and cultural programme with a scope of more than 40 countries in the region. Through our programme of events on arts, culture and education we act as a catalyst for the discovery of the diverse arts and cultures of Asia and the Asian diaspora, and serve as a bridge of understanding between the UK and Asia.